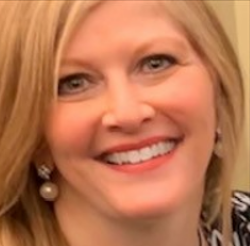 Lisa Sales has been a management and strategy consultant with Booz Allen Hamilton’s Global Defense Group for the past decade and continues to provide consulting services to a commercial corporation. She was awarded the Fairfax County, Virginia Citizen of the Year in 2020 by the Fairfax County Federation of Citizens Associations. In September 2021, Ms. Sales was honored with the “Lady Fairfax Award” for Outstanding Citizen of Fairfax County by the Board of Supervisors for “demonstrated exceptional volunteer service, heroism, or other special accomplishments.” She served on a winning presidential candidate’s Domestic Policy Team for Women & Families where she wrote or contributed to numerous policy papers on gender equality, including Domestic and Sexual Violence and the Equal Rights Amendment for the transition team.

Ms. Sales is a former Chairwoman of the Fairfax County Commission for Women (CFW) and previous Mount Vernon District Commissioner.  CFW advises the County Board of Supervisors on policies and initiatives to promote gender equality, eliminate violence against women, and honor women and girls in Fairfax County. As well, she is an advocate for strengthening laws on protective orders by providing greater protections to survivors of domestic and sexual violence, particularly when it comes to firearms surrender as she believes no violent recidivist subject to a protective order should be permitted guns as a matter of public safety. She has testified ten times before the Virginia General Assembly over the past three sessions. Ms. Sales also sits on the Fairfax County Council to End Domestic Violence. She has been active with the Northern Virginia Regional Commission facilitating military-community partnerships and was a task force member of Supervisor Dan Storck’s Moving on Safe Haven Project to ensure emergency domestic violence shelters are made available to those in need along the Route 1 corridor. She is a member of the Public Policy Committee for the statewide Virginia Sexual and Domestic Violence Action Alliance, and on the Board of Directors at Good Shepherd Housing and Family Services seeking to provide more affordable housing to women and children in the region.  Ms. Sales is, herself, a sexual assault survivor who endured a seven-year protracted court battle against her perpetrator, never giving up and wanting to be sure there was a documented paper trail on her thrice-arrested attacker should he victimize others again. While subject to her protective order, he would later attempt to shoot a couple in a Falls Church shopping center because he wanted their parking space. Recognizing there is a link between the lack of equality for women and the sexual violence perpetrated against them propelled her onto the leadership team of the VAratifyERA campaign, coordinating efforts in Northern Virginia and throughout the state with a number of other dedicated volunteers.  Ms. Sales is now an Advisory Council Member for the national ERA Coalition which seeks to ensure the Equal Rights Amendment is enshrined in the U.S. Constitution. (ERA Testimony). For her work, she was an invited State of the Union 2020 guest of Congressman Don Beyer’s (his Op-ed), an amazing full circle experience as some twenty-five years before, while working at the Office of Management and Budget, Ms. Sales had written a piece of the State of the Union in President Clinton’s address. Ms. Sales’ story of sexual assault was featured in Yahoo News and picked up internationally by other publications in 2021. Two months later Booz Allen fired her when she was scheduled to be out for major surgery.

While at Booz Allen Hamilton, Ms. Sales advised federal government clients such as the Department of Defense on matters of policy, data analytics, strategic communications, project and change management. Ms. Sales has worked in both the public and private sectors, having also served as a consultant for numerous nonprofit organizations. She has worked for the Executive Office of the President, two governors, a member of Congress, and many state and local officials from both parties. She is the former Executive Director of THE MASHA FUND, a voluntary effort bringing impoverished children from just outside the dead zone of the Chernobyl nuclear disaster to America to learn English, receive much needed medical care and have fun in a radiation-free environment. She has worked on service projects in conjunction with Columbia University for the New York City Office of the Mayor & the Manhattan Borough President’s Office, the Los Angeles Dodgers & the Jackie Robinson Foundation, and with Operation Homefront on the Military Child of the Year Program. She has been an adviser to the Army's Office of the Assistant Chief of Staff, Division of Privatization & Partnerships as well as for the Air Force Secretariat (SAF) working on public-public and public-private partnerships. Before parting ways with Booz Allen Hamilton, she was an adviser to the Office of the Secretary of Defense (OSD) working on the Advana team (data analytics, digital modernization, and transformation) and with OSD’s Office of Personnel and Readiness, Military Community & Family Policy.

Over the course of her career, Ms. Sales has worked on the following policies or issue areas or has helped  drive legislation, including the ERA; wrote Virginia House Resolution HR277 in the 2021 session which would drive a statewide gender and racial equity assessment of all state agencies, departments, boards, and authorities; the VLAP, a law audit project which directs the review of all state code, and will recommend modernizing statutes and terminology to include gender-neutral language and move to void discrimination or discriminatory language; Paid Family and Medical Leave (with the Campaign for a Family Friendly Economy); mandatory workplace anti-harassment training; “The Silenced No More Act” on nondisclosure agreements; protective order enhancements to include firearm surrender; state pay equity task force that brings industry to the table; review of current history curricula with VA Department of Education and federal Department of Education to include both race and gender and to ensure women are a cohesive part of all history and social studies education so that more diverse perspectives and women of all backgrounds are reflected; increasing the statute of limitations on reporting sexual assault and battery and sexual harassment in the workplace; increasing access to marginalized groups, including women, minorities, and low-income residents by advocating for a more flexible Virginia Freedom of Information Act (VFOIA) to enable their participation in governmental boards via electronic meetings; raising scholarship funds for minority scholars, working with the Los Angeles Dodgers, UCLA, and the Jackie Robinson Foundation; higher education, student financial assistance and HBCUs while at the Office of Management and Budget; apprenticeship programs and a cyber workforce roadmap to encourage women and minorities to participate in STEM activities and work towards a career in technical fields (including with the Northern Virginia Regional Commission and George Mason University).

In 2021, Ms. Sales wrote the first equity statement for a Fairfax County board, authority, or commission into the bylaws for the Commission for Women, hoping other boards would be inspired to act similarly. She also worked with the LWV-Virginia and a team (including a dozen nonprofit organizations) over the past couple of years to execute a United Nations Convention on the Elimination of All Forms of Discrimination Against Women Resolution in Fairfax County (as part of the Cities for CEDAW initiative) and was a panelist at the United Nations NGO Commission on the Status of Women CSW66 Forum in March 2022. Finally, Ms. Sales worked with lawmakers to introduce and pass two bills that were officially enacted July 1, 2022, impacting the judicial system and survivors of sexual and domestic violence. She holds a Master of Public Policy and Administration from Columbia University’s School of International and Public Affairs; a Bachelor’s in Political Science and International Relations from the University of California, Los Angeles (UCLA); and certificates from Harvard and Georgetown Universities.