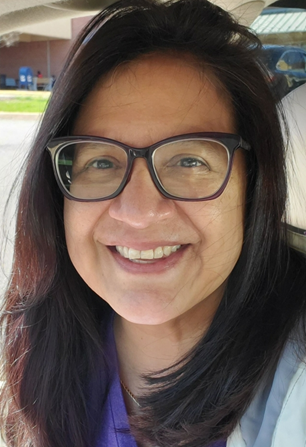 Sonia Ballinger is a wife of thirty-two years, a mother of three grown adult children, a mother-in-law, and a proud “Gam Gam” (grandmother) of two.  She has been a Latina, feminist activist for years. When women received the call to rally on January 21, 2017, Mrs. Ballinger crocheted pink “cat” caps and distributed them in D.C. The experience was a profound one for her.

She recalls being a sophomore in high school when she skipped school and hopped a Metro bus to attend her first National Organization for Women (NOW) rally for abortion rights. She felt her power then and was inspired to be an advocate on behalf of women and for the rights of struggling Latinos trying to learn English and obtain an education. As both her parents were immigrants, Mrs. Ballinger was passionate about supporting the immigrants she attended school with, believing she should stand up and speak up for marginalized communities.

Living in Loudoun County, Mrs. Ballinger has held board positions with NAACP-Loudoun, the League of Women Voters-Loudoun, her homeowner’s association, and has worked for the local party committee. She also served on the Loudoun Literacy Council and worked in support of the nonprofit organization, Virginia Marijuana Justice. Mrs. Ballinger enjoys participating in and organizing rallies with one of her most memorable being the 2019 Lights for Liberty event. Lights for Liberty stands in solidarity with immigrant communities and works to hold members of Congress accountable to their long-held promise of creating a path to citizenship and delivering lasting protections for undocumented families finally putting an end to the fear of deportations and family separations.

Currently, Mrs. Ballinger serves on the boards of the Sterling Community Center the Cascades Senior Center and is pleased to be the newly appointed Vice President, Membership for Virginia NOW. She honors a self-made vow to help those in need and continue the trudge forward in this never-ending push for women to become full and equal citizens in America.