Sugar and Spice and Not So Nice: The Roar for Little Girls

Try trying to explain to a first-grader why a bunch of conservative old white men are denying women their equal rights. 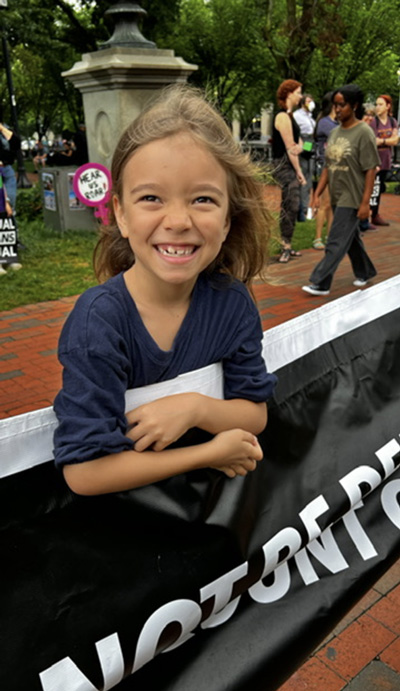 As appears in Ms. Magazine and originally published in Women’s eNews on December 26, 2022.

It was at first quiet and misty in Lafayette Park across from the White House where several hundred from various groups were gathering—namely Virginia National Organization for Women (NOW), Equal Means Equal and Rise Up 4 Abortion Rights. But as the raindrops came and a storm brewed, so did a clarion call for women’s equality and reproductive rights.

Hours later, a stampede of women warriors from all over the country would join our groups, descending onto 1600 Pennsylvania Avenue and demanding to be equal in the U.S. Constitution, wanting to remove the restraints of thousands-of-years-long second-class citizenship, oppression and worse. With the increase in precipitation, a deafening sound emerged from the women, the marginalized and our male allies. Of all the protests, rallies and gatherings I have been involved in, I have never heard a sound so concentrated, ear-piercing and agonizing.

Being introduced to the movement was 6-year-old Korean American, Sophie—the granddaughter of a NOW leader in Lincoln County, Ore. A resident of Virginia, Sophie had just learned that in 2020, her state became the final and requisite 38th state to make women’s rights equal rights, through action in the state legislature. She could not comprehend why then we still did not have a 28th Amendment published in the U.S. Constitution, as our history books instruct.

Sophie was not alone in her confusion—but trying to explain to a first-grader why a bunch of mostly conservative, aged, white men were not following the rules, and were in fact, rolling back women’s rights, would be too complicated, full of psychoanalysis on power, control and legal technicalities akin to walking a tightrope.

The ultimate betrayal is that which is by your own government.

Literally sitting in the gutters at the curbs of the White House in the pouring rain, water rushing over us soaking us to the skin, I wasn’t about to explain to her at such a tender age that women had died, were beaten, starved themselves, were imprisoned and force-fed fighting for rights we still do not have over 100 later. Ignorance is often bliss and the first time one steps out in the movement should be a motivating and memorable one.

Sophie stood proudly holding our Equal Rights Amendment banner all morning and, in the afternoon, we found her crouched down under it covering her ears grimacing; the sound emanating from adult women of all ages was painful.

I am reminded of the saying, “Hell hath no fury like a woman scorned.” Women are angry.

The day’s experience was symbolic of so much: news reports on a 10-year-old Ohio rape victim, which would be followed by the euphoria of a Kansas win where nearly 60 percent of voters chose to support abortion rights despite party, then to the shouts of “murderer” from the floor of Indiana’s statehouse by a minister-turned-legislator levied against his colleague on the other side of the aisle.

I wasn’t about to explain to her at such a tender age that women had died, were beaten, starved themselves, were imprisoned and force-fed fighting for rights we still do not have over 100 later.

The ultimate betrayal is that which is by your own government. And make no mistake, our government is betraying more than half its total population, continually setting us back years—all the while, throwing up obstacle courses complete with roadblocks, hurdles, water holes and sand traps, maintaining our purgatory.

Women weathered yet another storm at the end of June and continue to take to the streets. On the anniversary of my firing from one of the nation’s biggest federal government consulting firms for telling my story of sexual assault to Yahoo! News, I stood with women (and a few little girls) fighting for agency and for the next generation. High schooler Ella Duncan-High would stand to remind legislators in a town hall meeting, “I am the youngest person in the room and lack of choice is going to impact my generation more than any other.”

We cannot let up. We will not back down. And we will never ever go back no matter what it takes. Neither sleet, nor snow, nor the threat of arrest, nor the drudgery of a stormy day will hold us back.

The Mother Lion is loose; hear us ROAR: Equality of rights under the law shall not be denied or abridged by the United States or by any state on account of sex.

That’s it—24 words that would begin to make women more equal. With these words, we could bring our claims to court under the strictest of scrutiny—giving everyday laws constitutional teeth—so we can make decisions about our reproductive health receive equal pay and benefits, avoid pregnancy and other forms of workplace discrimination and retaliation, be more protected from sexual and domestic violence, and be privy to the whole of the freedoms our counterparts enjoy without the need to ask. Let’s face it, without the need to be beggars without result, for our liberties.